"In two years of combat you can imagine I have seen a lot of death… but nothing has ever stirred me as much as this… how could people do things like that? I never believed they could, until now."

US Staff Sergeant Horace Evers, on what he witnessed while liberating Dachau 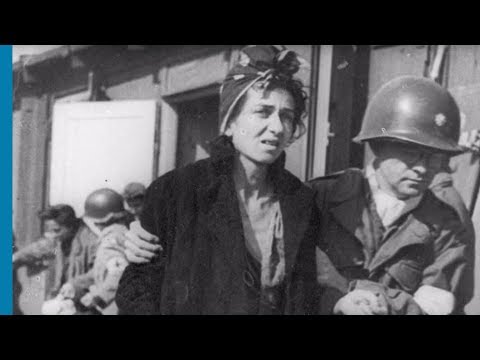 American teachers – especially those who teach world history or the history of WWII – often search for an entry point into the study of the Holocaust. The story of the liberation of the Nazi camps is a natural bridge between the study of the war itself and the genocide perpetrated against the Jewish people during that war.

Yad Vashem’s International School for Holocaust Studies, through the "Echoes & Reflections" Holocaust teaching program for American educators, has created a film to provide this entry point. Liberators and Survivors: The First Moments is a short (15-minute) film that opens with footage of WWII and maps illustrating the progress of the Allied armies, and quickly moves into the initial dramatic encounters between liberators and survivors. It opens a window into these powerful moments and provides an educational opportunity to discuss them.

The focus of the film is the American soldiers — many no older than 18 or 19 — who liberated Nazi camps and were the first outside witnesses to the monstrous evidence that the Nazis and their collaborators had committed unspeakable crimes against civilians. Selected testimonies presented in the film show the intense emotional effect that liberation had on these young men, such as Leon Bass, who was 20 years old when he helped liberate Buchenwald. Bass relates, “I can never forget that day, because when I walked through that gate I saw... human beings that had been beaten, they’d been starved, they’d been tortured. They had been denied everything.”

Primary sources include the reaction of General Dwight D. Eisenhower, who immediately understood the need for evidence to counter the possibility of denial, a problem sadly still relevant today. "I made the visit [to the camp of Ohrdruf, as sub-camp of Buchenwald, so as] to be in the position to give firsthand evidence of these things if ever, in the future, there develops a tendency to charge these allegations merely to 'propaganda.'" After requesting that members of Congress and journalists as well as other soldiers in the region come personally to view the horrors, he wrote: "We are told the American soldier does not know what he is fighting for. Now at least he will know what he is fighting against."

The film shows how many of the American liberators suspended their military missions in order to provide care for the survivors. It also highlights one liberator who, like others, became a moral voice in later years, sharing his story and pleading that humanity learn from his experience. Interwoven with the liberators’ testimonies are those of Jewish survivors, who speak of the compassion shown by their liberators. Solly Ganor, liberated after a death march from Dachau, calls his liberator, Japanese-American Clarence Matsumura, simply “his angel.”

Developed for use with students in the classroom, the film was created with great sensitivity, choosing to focus on the human story rather than just showing shocking images. As such, it has met with a very enthusiastic response on YouTube – with almost 700,000 views in its first year. It has received hundreds of comments including, “This was a great educational video. Needs to be seen everywhere” and merely “Thank you for remembering.” One viewer wrote: "The liberators and survivors of concentration camps were astute enough at the time to consider the possibility that people wouldn't believe them. Signs proclaiming 'this happened' appeared immediately. Now as witnesses to the Holocaust are nearly all gone, it is extremely important that truth and facts, supported by those who experienced the horror of these events, is not forgotten."

Liberators and Survivors: The First Moments was produced with the generous support of Dana and Yossie Hollander and the Snider Foundation.