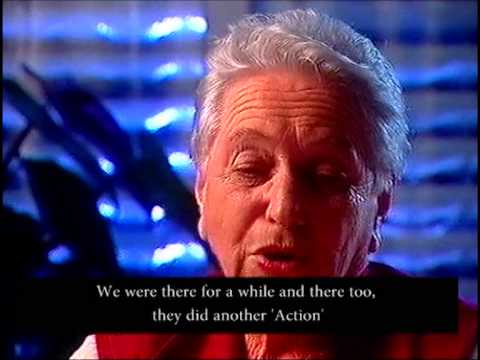 Chana Weismann was born in 1929 in Kovno, Lithuania to a family of two children. In June 1941, German forces began bombing Kovno and Chana's family fled in the direction of the Vilna Bridge. Discovering that the bridge had been bombed, they had no other choice but to return to Kovno.

On their way back to Kovno, the family members separated, in order to draw less attention to themselves. Chana and her father were caught by the Lithuanians and were taken to the Seventh Fort, a fortress in the adjacent city. Chana was separated from her father, but soon after met with her mother, who had arrived at the Seventh Fort after having realized that her husband and daughter had been captured. A few days later, Chana saw a group of men, her father among them, being led in the direction of the killing pits. During the night, Chana heard the echo of shots from the direction of the pits and understood immediately that her father was no longer among the living.

A few days later, Chana and her mother were transferred to the Ninth Fort where they were
held for two days before being relesed along with the other women and children. In 1941, Chana, along with her mother, brother and their extended family were transferred to the ghetto in the Slovodca neighbourhood. In one of the actions in October 1943, Chana and her family were deported to Estonia, to a camp where they suffered from freezing cold, extreme hunger, and extremely poor sanitary conditions.

After half a year the family was transferred to the Kivioli labor camp. During one of the actions in the camp Chana’s mother was taken away, along with many others, and was shot to death in the forest. A few months later, Chana was deported with her brother to the Stutthof camp in Germany. There, Chana managed to survive two children's actions, the first time by escaping and the second time due overcrowding of the crematorium. Following Stutthof, Chana was transferred to several camps, of which the last was Bergen-Belsen, where she remained until the camp was liberated in May 1945. Her brother was sent from Stutthof camp to Steinberg camp, also ending up at Bergen-Belsen, but died shortly before the camp was liberated.

In 1947, Chana immigrated to Israel. She is married and has two children and three grandchildren.