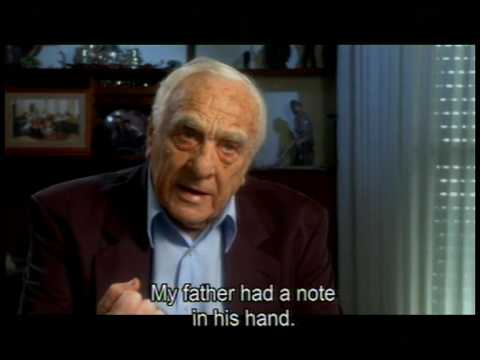 Baruch Shub- The Holocaust in Vilna

Baruch Shub was born in Vilnius, Lithuania, in 1924, the second child in a Hassidic family of six. In 1939 the Soviets conquered Vilnius, and in June 1940 the city was annexed and Communist rule instituted. Consequently, the universities were opened to Jews, and Baruch went to study mechanical engineering.

On 11 March 1942, the Jews were ordered to gather in the town square. From his hiding place in the garage, Baruch saw a huge line of people, including children, moving slowly towards a barn. The sound of shooting could be heard. At night, the barn caught fire and a thick stench filled the skies. Zipporah was among the 840 Jews murdered there that day.

After the ghetto was set up, the Jewish youth established an underground movement in the ghetto, bought weapons and prepared to escape to the forests to join the partisans. However, the Germans threatened death should anyone be found missing from the ghetto, and their activities ceased.

After hearing from his mother in Vilnius, Baruch returned to his hometown, where he worked in German manufacturing plants. He established an underground movement with his friend Yaakov (Kuba) Koshkin, and later joined the FPO (United Partisans Organization). In September 1943, the Germans carried out a number of aktionen (roundups of Jews in preparation for their deportation to concentration, forced labor or death camps). Following an armed clash with the Germans, Baruch and some friends joined a group of partisans in the Rudnicki Forest. Two weeks later, the Vilnius ghetto was liquidated.

Baruch enlisted in a Russian paratrooper unit, participating in various military operations. In July 1944, the Red Army conquered Vilnius, and Baruch discovered that his entire family had been murdered. After his army discharge, he decided to emigrate to Eretz Israel, finally arriving in October 1945. He was recruited to the Haganah, serving as an airplane technician during the War of Independence. Two years later he transferred to El Al, rising through company ranks to Chief Flight Engineer. After 33 years, he retired.

Baruch has been active in Holocaust commemoration for many years. He serves as Chairman of the Israel Organization of Partisans, Underground Fighters and Ghetto Rebels, and is a member of the Yad Vashem Directorate, the Commission for the Designation of the Righteous Among the Nations, and the Claims Conference Board of Directors. He lectures on antisemitism and Holocaust denial.

Baruch and his wife Nelly have two children and eight grandchildren.