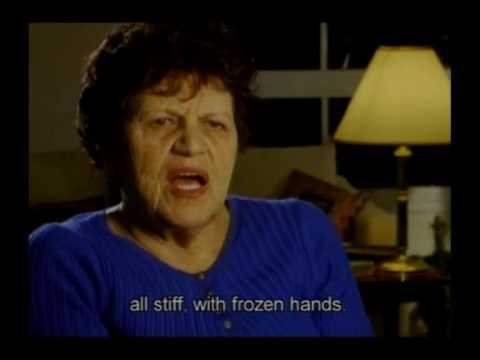 Mirjam Schuster was born in 1935 in Zarojani, Moldova, to an observant Jewish family of six children. In 1941, the family was deported by Romanian soldiers and forcibly marched, together with all the Jews in the area, towards Transnistria. After more than two months of walking day and night, Mirjam and her family arrived at Balki, near the city of Bar, where thousands of Jewish prisoners were crammed into horse stables without windows or doors. The stables were terribly crowded, and rife with hunger and disease. Mirjam and her family slept on the exposed concrete floor. Her mother saw to Mirjam’s needs and those of the other children, while her older sisters smuggled in food from the adjacent village.

Mirjam remembers a Jewish child named Mendele, who was smuggled into the camp by his parents. Mirjam took Mendele under her wing and protected him from other children who were bullying him. One day, the Germans found Mendele and murdered him. His horrific death left Miriam deeply scarred.

In 1944, the Soviets liberated Balki. Out of more than 10,000 inmates, only a few hundred had survived. Following liberation, the Jewish Agency placed Mirjam in a children’s home. After a few months, she boarded an illegal immigrant ship, which was intercepted by the British and sent to Cyprus. Just before the establishment of the State, Mirjiam finally reached Israel’s shores.

Mirjam married Moshe and has three children and eight grandchildren. After her children had grown, she began volunteering with new immigrants, helping ease their adjustment to living in Israel. Today, Mirjam is the volunteer director of the “Help for Holocaust Survivors” organization.